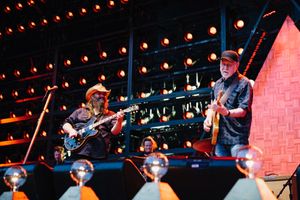 On July 23,2022 I had the honor of playing with Chris Stapleton at Wrigley Field.  Being a die-hard Cubs fan getting to roam Wrigley Field that day & night was a dream come true.  Thank you Chris for the privilege. … 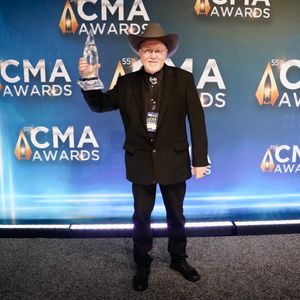 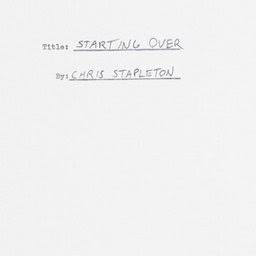 2021 ACM Nomination for Song of the Year!

ACM SONG OF THE YEAR

Meant To Be – Bebe Rexha featuring… 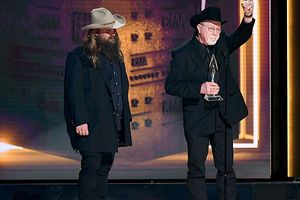 What an honor to win this CMA award for Best Song- "Broken Halos".

CMA Award for song of the year: Chris Stapleton and Mike Henderson won the first trophy of the night for “Broken Halos.” Stapleton… 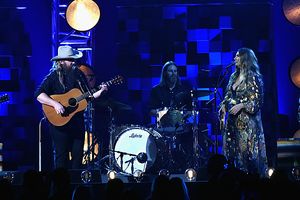 2018 ACM Nomination for Single of the Year

Great news that “Broken Halos” was nominated for 2018 ACM Single of the Year!

So proud to have not one but THREE songs on several “Best Of 2017” song lists.

Second One To Know 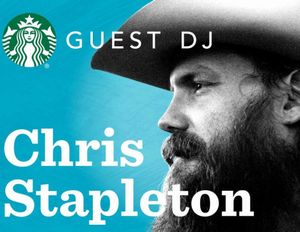 Check out Chris Stapleton's playlist. Proud to say my buddy included my cut of  "Mean Red Spider", from my latest CD, If You Think Its Hot Here.
Take a listen to this great playlist with cuts from Chris and… 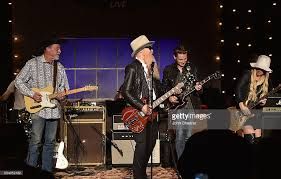 There was an ax to grind at Skyville Live Tuesday night — many of them.

Videos at the Ryman with Chris Stapleton

Check out 3 of the songs I had the pleasure of performing with Chris at his show at the Ryman.  I had a blast!

"Stapleton began spending his Thursday evenings writing songs with Mike Henderson. “I’d take him over there every Thursday night and drop him off, so he could have his adult beverages while they worked,” says Morgane Stapleton, Chris’ wife and harmony…

Check out this new article in Rolling Stone about a song I wrote with my buddy, Chris Stapleton, "If It Hadn't Been For Love".
About time the world figured out how great Chris is!

Nashville may be Music City, but it's never had much of a reputation as a blues town. Our musical bread-and-butter has long been country, and over the past 10 years the local Americana and rock scenes have been exploding. Yet when folks think of blues hotspots, they generally think Memphis, Chicago or the juke joints of the Mississippi Delta.

But every Monday night for the past 25 years, with little fanfare and just a few brief respites, one of the best living blues guitarists has been plying his trade at, of all places, The Bluebird Cafe — the songwriter haven that normally caters to acoustic guitars, sensitive lyrics and well-behaved crowds who are shushed if they speak above a whisper.

Of course, on Monday nights, when Mike Henderson and his mighty band take the stage, typically around 9:30, all rules of decorum fly out the storefront window. In fact, the show usually features a warning from Henderson that if the audience doesn't start hootin' and hollerin', they'll be punished with an arsenal of Bobby Goldsboro tunes. He's been known to make good on that threat.

But Henderson rarely has trouble igniting the crowd. Armed with his trusty old Silvertone guitar — tuned down to open C, two full steps lower than a typical guitar — and his Fender Bassman amp, he and his band raise one of the most righteous ruckuses you'll ever hear. His brand-new album If You Think It's Hot Here, recorded live in the studio, captures that magic.

Featuring keyboardist Kevin McKendree, bassist Michael Rhodes and drummer Pat O'Connor, who are usually featured in his Monday night band, If You Think It's Hot Here is 52 minutes of raucous roadhouse blues highlighting Henderson's stellar guitar playing, much of it using a slide. There are many fine blues musicians out there, but there are very few who channel the legends of electric blues' heyday — folks like Elmore James, Muddy Waters, Hound Dog Taylor, B.B. King or John Lee Hooker — as well as Henderson. That's not to suggest Henderson is an imitator, just that his well of inspiration is the original source, free of the rock influence and flash that is prevalent in many latter-day blues guitarists.

It doesn't hurt that his band plays the baddest shuffle beat you're likely to hear these days. The backbone of blues music, the shuffle is a deceptively tricky groove: It's not uncommon to find very accomplished drummers in a variety of genres who can't quite get it right. But when Rhodes and O'Connor lock in with each other on upbeat shuffles like "Send You Back to Georgia," "It's Alright" and "Gamblin' Blues," it sounds like a runaway freight train about to fall off the tracks, yet somehow hanging on.

"There's a lot of different ways to play a shuffle," Henderson tells the Scene. "The one I like to hear most is the double shuffle, where both hands are doing the same thing, one on the cymbal, one on the drum. I've always encouraged whoever is playing drums to play out, and to be kind of busy, which is the way the original Chicago guys did it. They were all over the place."

The title track is a delightfully laid-back soul tune Henderson wrote with R.S. Field that ponders what some less scrupulous people might find awaiting them in the afterlife. "I've played it live ever since we wrote it about 15 years ago," Henderson says. "People have always responded to that song. I've had people come up and say, 'We drove 300 miles. I sure hope you're going to play this song, because that's the one we came to hear.' "

Throughout the album, Henderson's guitar work is a sublime blend of raw energy, uncanny phrasing and impeccable taste. And he's a terrific harmonica player and singer too.

Henderson's deep grasp of the blues is even more amazing when you consider that he's mostly earned his living as a country songwriter, having scored cuts with the Dixie Chicks, Kenny Rogers, Darryl Worley, Patty Loveless, Travis Tritt, Trisha Yearwood, Marty Stuart and Randy Travis, to name a few. He's an accomplished mandolin player to boot who spent several years in the bluegrass band The SteelDrivers.

In 2011, Adele performed "If It Hadn't Been for Love," a song Henderson wrote with SteelDrivers bandmate Chris Stapleton (see our story on Stapleton on p. 49), on her Live at Royal Albert Hall DVD. It was also featured on the European release of her blockbuster album 21. How Adele came to record the song is a bit of a mystery, Henderson says.

"The way Chris and I heard the story, when Adele was touring America, she was spending a lot of time sitting up in front by the driver because she smokes, and she needed a window," he recalls. "She and the driver got to talking. ... He asked, 'Do you like bluegrass?' And she goes, 'Well, I don't know, I haven't really heard a lot of it.'

"And he played the SteelDrivers record for her, and she fell in love with that song, and had her band learn it, and they started doing it. ... But I do not know who the bus driver was. And if I could ever find out, I owe him at least a good steak dinner, a bottle of good whiskey or something."

In the meantime, Henderson keeps showing up at The Bluebird every Monday to throw down with his buddies.

"I tell people, a lot of guys get together one night a week and play poker," Henderson says. "Instead we play music." And this coming Monday, he'll celebrate the release of If You Think It's Hot Here.

A Mandolin Player ZZ Top Can Love
~ by Peter Cooper, The Tennessean

Read about and see pics of Joe's show that Mike participated in featuring the music of Howlin Wolf and Muddy Waters. The show will be broadcast on PBS in March, 2015.

Do each of you have a favorite guitar right now?

AUBERBACH: I’ve been playing my white Kent a bunch. We’ve been doing an album in here over the past week and we’ve used that on every song. I bought it in a guitar shop in San Jose. I’ve had it about a year and a half.

GIBBONS: The tremolo arm on that is the sweetest primitive setup. This ain’t rocket science. It’s just a bending piece of metal. Dan told me, “I bought a ’53 Gibson Gold Top and this Kent…”

AUERBACH: At the same shop.

GIBBONS: On the same day. And he said, “I don’t know if I’ve played that Gold Top yet.” There’s a great guitar player here in Nashville, Mike Henderson…

AUERBACH: Oh, I love him. [sings a line from Henderson’s “When I Get Drunk”] “When I get drunk, who’s gonna carry me home…”

GIBBONS: Well, he’s had one guitar and one amp that he’s played as long as I’ve known him, which is a significant amount of time.